Blacktip Island To Break Free From Base 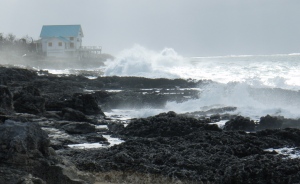 Winter waves threaten to break Blacktip Island from its base

“A combination of ocean acidification and deep ocean waves have been gnawing away at the island for years,” Tiperon University at Blacktip marine geologist Ernesto Mojarra said. “This is soft limestone. It doesn’t hold up.

“The erosion’s most noticeable around the 100-foot depth. If you took a cross-section of the island all the way up from the sea floor, the exposed land would look like a lollipop on a needle-thin stick. It’s only a matter of time, a very short time, geologically speaking, before that sucker breaks off,” Mojarra said.

“What happens then is anyone’s guess. The island could sink, what, 6,000 feet straight down. Or, given that it’s porous limestone with lots of air pockets, it could very well float. There’s no precedent.”

Island residents have feared this prognosis for some time.

“We’re not a bunch of Chicken Littles yelling, ‘The sky is falling.’ Far from it. We’re yelling, ‘The island’s sinking.’ It’s different.”

Government plans to chain the island to its base proved impractical. Instead, authorities have stitched together a giant sail, to be raised on the cell tower at the island’s center, and are submerging a warehouse door to act as a rudder at the island’s northern tip.

Blenny and other residents are stuffing island sinkholes with Styrofoam and boat fenders to increase the island’s buoyancy.

And if the island sinks?

“We all have skiffs lashed to our roofs,” Blenny said. “We just climb up, cut ourselves free. I, myself, sleep in my skiff, machete in hand. Just in case.”

Meanwhile, island scuba operators have been taking advantage of the geological anomaly.

“Tourists ask all the time how deep you have to go to see under the island,” Eagle Ray Divers divemaster Gage Hoase said. “Now we can tell them. Ninety-three feet. Then we take them down and show them.”

“We’re selling Under-Island Diving specialty courses like crazy,” Club Scuba Doo dive operations manager Finn Kiick said. “This is the only place on Earth you can be certified to look at the bottom of an island. We charge accordingly, of course.”

One response to “Blacktip Island To Break Free From Base”