Blacktip Island To Get Traffic Signals 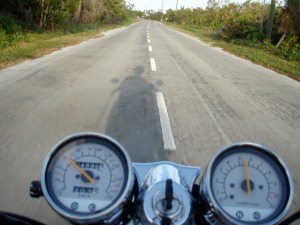 A motorcycle speeds past one of Blacktip Island’s intersections at rush hour Thursday.

Citing growing safety concerns, the Department of Public Works will install traffic lights at both of Blacktip Island’s intersections this week.

“This has been a critical situation for a while,” Public Works director Dusty Rhodes said. “There’s the road around the island, and there’s the one across it. Where they come together, you’ve got disaster waiting to happen.”

Not all locals are happy with the decision.

“We hardly use the existing stop signs,” long-time resident Frank Maples said. “There’s what, 20 motor vehicles on island? I don’t recall any of them smashing into one another. If these lights go up, the next thing you know the government will be paving the roads, then painting stripes on them, then giving them names. It’s a slippery slope. People come to Blacktip to get away from that sort of rubbish.”

“The stop signs aren’t working. Last year alone we had three near-misses . . . that we know of. We don’t want that to escalate, especially with the holiday season on us. These roads may not have names, but I assure you they’ll have traffic signals. We’re installing cameras, too, so we can keep an eye on things.

“Our job is to bring this island into the 21st Century, kicking and screaming if necessary. If we step on a few toes in the process, well, so be it.”

Police officials confirmed the Caribbean island has seen an uptick in the number of vehicle accidents in recent months.

“All have been one-car affairs, usually on Friday and Saturday nights, but you can’t argue with the statistics,” Island Police Constable Rafe Marquette said. “The trees and power poles are taking a terrible beating.”

The most recent incident involved a lone scooter rider who ran a stop sign and sped into Eagle Ray Sound, IPC Marquette said.

“He blew through the intersection full tilt. Zoom! Splash! We had to call scuba rescue to pull him out. He nearly drowned.”

Rhodes would not comment on rumors his department would also be erecting nets beyond each intersection to contain other wayward motorists before they reached the water.