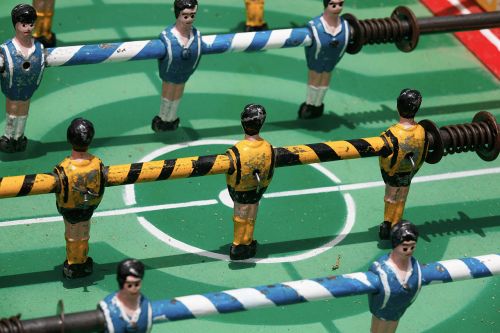 A group of Blacktip Island game enthusiasts this week constructed a life-sized foosball court designed to use people as the on-board figures after the island’s sole table-soccer table broke.

“The table football game at Sandy Bottoms Beach Resort finally disintegrated from the salt air, but lots of people still wanted to play,” Payne Hanover said. “Also, a lot of us were looking for a quarantine project, so rebuilding the game in life-sized proportions seemed like the logical way to go.

“Peachy Bottoms at the store donated the plywood for the walls and the poles,” Hanover said. “We set it up by the landing strip—that was the only cleared spot that was big enough.”

Rules are much the same as traditional table football, organizers said.

“We Velcro the on-court players’ arms to the horizontal poles and chuck a soccer ball in with them,” Dusty Blenny said. “They can’t kick the ball unless one of the players outside whacks the pole they’re strapped to.

“We wanted to be able to spin the poles, but we haven’t figured out the mechanics of that yet,” Blenny said. “It’s still on the drawing board, but it involves ropes and pullies and lots of Dramamine.”

Players say the games have gone well so far.

“We use standard pick-up team rules,” Wendy Beaufort said. “Whoever turns up plays, with each ‘player’ taking turns picking team members and assigning them to whichever poles.

“We take regular beer breaks, too, since this is still, at heart, a drinking game.” Beaufort said. “And if more people show up than there are spots on the field, we allow substitutions, too.”

The game is not without its drawbacks, some said.

“Your arms get damned tired strapped to that pole,” Hugh Calloway said. “There’s also nothing you can do to block a ball to the crotch. We keep punking Lee Helm that way, but the dumbass hasn’t figured it out yet and keeps coming back for more.

“With the wall, it’s also tough to light the court to play at night,” Calloway said. “We lined up cars and turned on the headlights, but those 4-foot-high walls block most of it. Payne’s working on scaffolding to hang reflectors to angle the light in.”

Some on the small Caribbean island scoffed at the idea.

“I don’t really see the point, but at least it keeps them off the road. For the most part,” Frank Maples said. “End of the day, I guess it doesn’t make any less sense than anything else does on this crazy island. So long as it doesn’t interfere with airplanes taking off or landing, I suppose it’s harmless.”