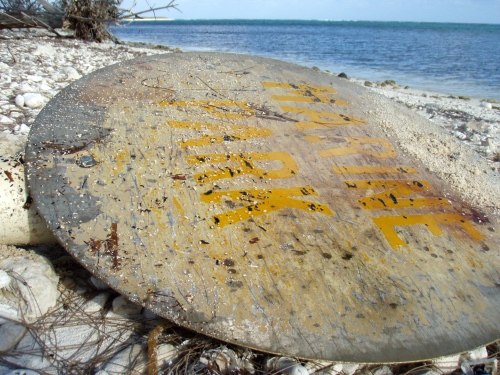 Blacktip Island residents worry a wave of vandalism will sweep over the Caribbean island with Blacktip’s lone police officer on strike for better working conditions.

“I’m the only policeman on Blacktip,” Island Police Constable Rafe Marquette said. “I work 24 hours a day, seven days a week. I try to take a day off, people call 911. I have a rum and Coke, some joker reports me for drinking on duty.

“I’ve addressed the issue with community leaders and with police headquarters on Tiperon,” Marquette said. “Since nothing’s being done, I’ve no choice but to man the picket line.”

“It’s a numbers thing,” T.I.P. spokesperson Dick Goby said. “We only have so many constables. To get a second one on Blacktip, the population needs to break 150. That’s not happening anytime soon. If ever.

“Bottom line, though, Rafe’s a public servant. It’s illegal for him to strike,” Goby said. “We’ve ordered him back to work. We’ve ordered him to arrest himself. He won’t do either. We’d love to send a second constable over, but our hands are tied.”

While many island property owners back the idea of a second constable, few are happy with Marquette’s tactics.

“We’re an isolated island. Vandalism, robbery, invasion, anything could happen,” longtime resident Frank Maples said. “Now, nothing’s happened yet, but who knows what could have if not for a strong police presence.

Other residents are less concerned.

“Rafe’s been on strike three days now, and I don’t think anyone’s noticed,” resident Polly Parrett said. “Blacktip’s a place you leave the keys in your car and your house unlocked. We usually don’t need even one constable.

“I mean, last week Dermott nicked my Jeep from the Last Ballyhoo after closing Saturday, but it wasn’t a worry,” Parrett said. “I just nicked it back the next morning. The biggest issue was dragging him out of the driver’s seat, what with him out cold.”

“James Conlee wrote a bad check for his bar tab, and Rafe wouldn’t so much as lift a finger,” said Sand Spit Bar manager Cori Anders. “He’s not on strike. He’s not even in a union. He’s just pouting in that air-conditioned police station of his.

“Our bottom line, so long as Rafe says he’s on strike, so’s his free beer,’ Anders said. “And with it being just him, it’s really more a picket point than a picket line, isn’t it?”

“This is exactly the indifference I’m challenging,” Marquette said. “I’ve drawn my point in the sand, and I won’t be moved.”